Tom Vitale is still mourning the loss of his beloved friend Anthony Bourdain.

The celebrated chef and Emmy-winning TV host tragically took his life in 2018 at age 61 while filming his hit series “Parts Unknown” in France.

Most recently, Bourdain’s life and legacy have been examined in a documentary by filmmaker Morgan Neville titled “Roadrunner: A Film About Anthony Bourdain,” which premiered at the Tribeca Film Festival days after the third anniversary of his death.

Anthony Bourdain’s longtime director and producer Tom Vitale has shared his memories in a new book about the late star.
(Todd Liebler)

Vitale, Bourdain’s longtime producer and director, wrote his own book titled “In The Weeds,” referring to a kitchen slang for being backed up during a rush. It details how the pair embarked on more than 70 trips around the world together while bringing Bourdain’s show to life.

“After Tony died, I pretty much did nothing,” Vitale admitted to Fox News. “I just couldn’t go back to work because Tony wouldn’t be there. So in writing this book, it let me keep that job [with him] alive for a little while longer, as strange as it sounds.” 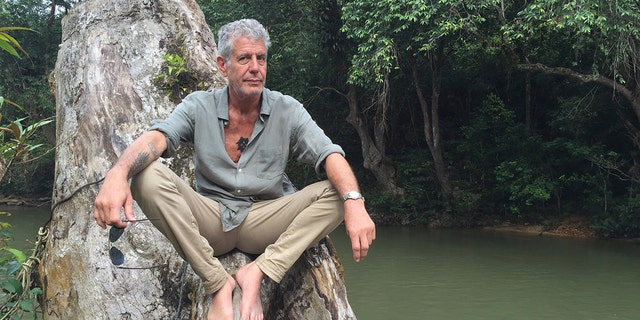 Anthony Bourdain passed away on June 8, 2018. He was 61.
(Courtesy of Tom Vitale/Hachette Books)

After years of working as a chef in New York, Bourdain’s book “Kitchen Confidential” catapulted him to fame in middle age. In “Parts Unknown” and other far-flung travel shows that feasted on not just indigenous foods but a wide spectrum of culture, history and shared passions, Bourdain quickly became a television icon. Vitale was just 26 when he began collaborating with Bourdain.

“Tony’s public persona and the private person that he was were two sides of the same coin,” the now-44-year-old shared. “Tony wasn’t so dramatically different from his on-camera persona… [But] he was shyer and more introverted. He was also much funnier and brutally honest. He was hilarious and intimidating. Everything was bigger in real life and what made it to the air.”

And Vitale made plenty of surprising discoveries about his boss and pal during their months-long journeys. 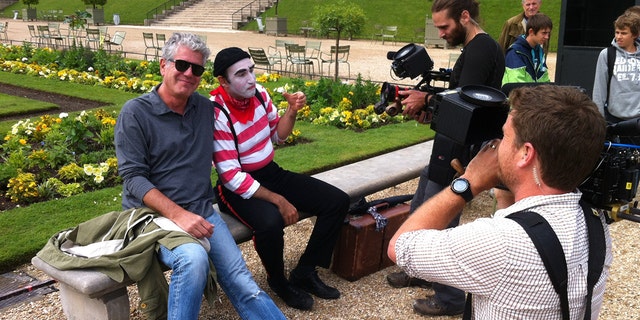 Anthony Bourdain, seen here in Paris, was not a fan of mimes.
(Courtesy of Tom Vitale/Hachette Books)

“He had a lot of guilty pleasures,” Vitale explained. “He loved celebrity gossip on Page Six. He loved Popeye’s fried chicken and their macaroni and cheese. That was comfort food for him… He had a laundry list of bizarre phobias which he would joke about in his shows. I thought a lot of them were humorous, but as time went on, I learned that most of them were real. He had a phobia of nurse shoes, alpine vistas, clowns, ordering room service. He did not like flying or germs.”

And working for Bourdain wasn’t for the faint of heart. While Vitale said it was far from a “Devil Wears Prada” situation, Bourdain was tough and had a no-nonsense approach to filming.

“He was extremely demanding,” Vitale recalled. “He had very high standards about everything. His feedback could be brutal if things weren’t going well. He was relentless in making sure he provided a quality product for people. The way he managed kitchens, you saw a lot of similarities with the TV crews. And the shows got bigger and more popular.” 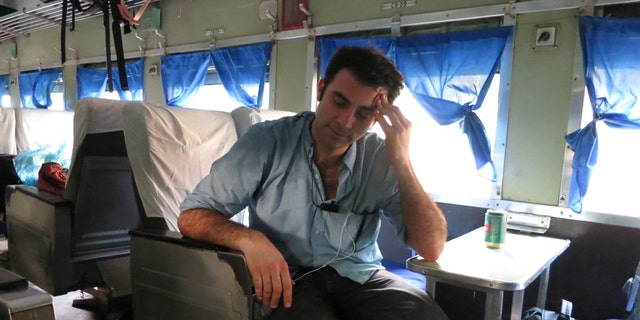 Tom Vitale said it wasn’t easy working with Anthony Bourdain – but he wouldn’t have had it any other way.
(Josh Ferrell)

And there were food disasters. Some were comical while others more horrifying. Vitale described how one time, a dish covered in flies was presented to the crew that was meant to be delivered to Bourdain. And witnessing animal slaughters never got easier with time.

“It’s not a pretty thing to see a pig get killed,” he said. “They scream a lot like humans and there’s a lot of blood flowing.”

But for Vitale, there’s no denying that traveling the world with Bourdain was an eye-opening experience. 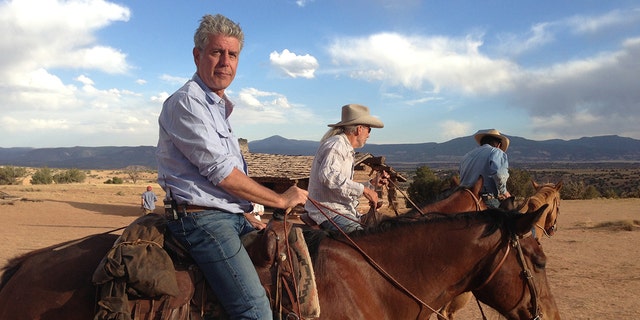 Anthony Bourdain fulfilling his dream of being a cowboy in New Mexico.
(Courtesy of Tom Vitale/Hachette Books)

“He loved Southeast Asia,” he said. “It’s just a magical place. It was always such a privilege to visit. He was so enthusiastic about that part of the world. We also had an amazing trip to Iran. You hear so many stories, but it was a wonderful place. The people there are so kind. I also enjoyed going to Colombia. That was lovely too.”

ANTHONY BOURDAIN’S LOVED ONES RECALL LATE STAR’S OBSESSION WITH TANNING: ‘I COULD NOT REALLY RECOGNIZE HIM’

But even as the crew faced intense hours of filming and non-stop traveling, there was one thing that was always on Bourdain’s mind. That’s when he revealed his much softer side.

“He spoke about his family all the time, multiple times a day,” said Vitale. “I didn’t include a lot of that in my book out of respect for his family. But he spoke about [his wife] Ottavia and his daughter all the time… He shared all sorts of stories and how he was so far away from them. it was hard for him.” 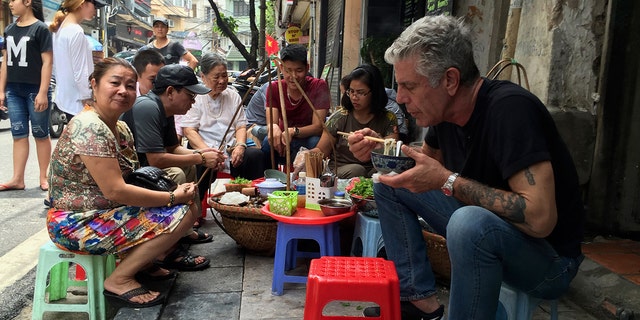 According to Tom Vitale, family was always on Anthony Bourdain’s mind.
(Courtesy of Tom Vitale/Hachette Books)

When asked if Bourdain ever showed any inkling that he was depressed or facing a private woe, Vitale replied, “I mean, all the time.”

“As long as I knew him,” he explained. “That was just part of his thing, him struggling with the existential crisis of being in the public eye and yet having this privilege to travel. It was all very complicated. It could be lonely and alienating. In retrospect, in looking back, yes, these things were kind of amplified in the end. But it’s nothing that wasn’t there from the beginning.” 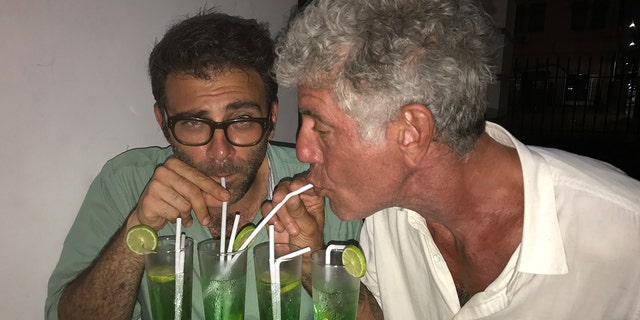 Nothing prepared Vitale for that phone call. He was shocked and saddened, along with the rest of the world.

“I did not deal with [his death] in a healthy way,” said Vitale. “But I think it would have been a big surprise to Tony to see the outpouring of grief and how much of an impact he had on people’s lives. It certainly didn’t make things easier. It only made it more complicated.” 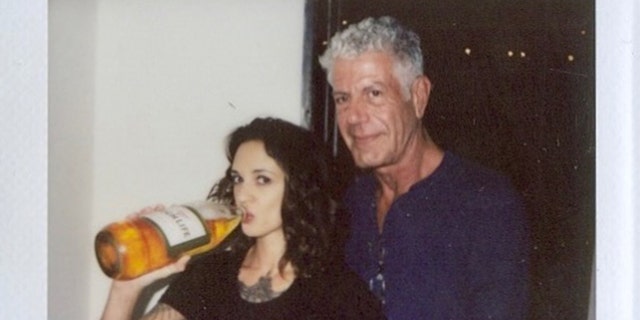 Tom Vitale said he spoke to Asia Argento (seen here with Anthony Bourdain) in an attempt to make sense of his pal’s tragic passing.
(Courtesy of Tom Vitale/Hachette Books)

In his quest to understand why Bourdain would take his life, Vitale sat down with his girlfriend Asia Argento. For many, his tumultuous two-year relationship with the actress loomed over his death. Days before Bourdain’s passing, photos were published of Argento hugging and kissing a journalist friend. Many insisted those images led to Bourdain’s suicide. The 46-year-old has vehemently denied those accusations, noting that she and Bourdain saw other people outside of their relationship.

“I was trying to wrap my head around what happened to Tony,” said Vitale. “I went to go see her long before I even thought about writing a book… It’s not my place to judge. I think that mistakes were made by everyone – everyone from Tony to me, to her. Everyone.”

Vitale said there’s not a day that goes by where he doesn’t think about Bourdain. He hopes his book will bring more focus to his life and accomplishments – not his death. 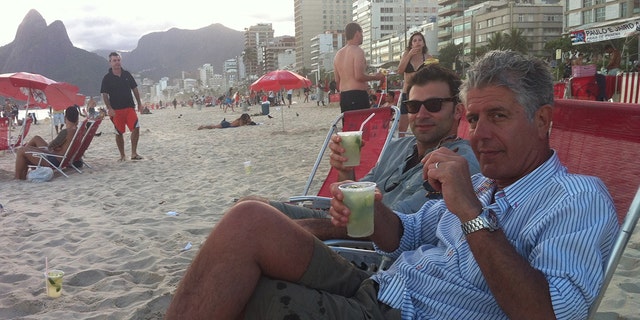 “It’s a dark comedy,” he said. “Tony used to talk about how some of your greatest failures and embarrassing moments were the most interesting things to write about. I took his advice. Tony used to say you can’t laugh if there’s nothing left to do but cry… I no longer want to be consumed by the way his life ended. I want to relish some of the good times we had. Those crazy, wild, adventurous years traveling together. I miss that. We all do.”

If you or someone you know is having thoughts of suicide, please contact the National Suicide Prevention Lifeline at 1-800-273-TALK (8255).